With deep roots in the railroad industry dating back more than a century, the Waukegan, IL-based Aldon Company, Inc. is an industry leader in the manufacturing and distribution of railroad safety and track repair products.

Since the company’s founding, Aldon’s reach has expanded to include virtually all aspects of industrial rail yard operations, as well as rail-based industrial firms in more than 300 different industries.

While Aldon resells numerous rail-related products, it is first and foremost a manufacturer. Aldon places a considerable premium on product innovation and is proud to offer a greater variety of railroad safety and track repair tools than any other supplier. They continually seek to develop new products that will improve railcar handling and welcome ideas from customers. The company also offers personalized product selection and installation guidance via its “ASK ALDON” service.

SafeRack is an Aldon Distributor

As the largest supplier of truck loading platforms and railcar loading systems in North America, SafeRack is proud to partner with Aldon to provide the nation’s widest array of rail safety and track repair products. With its emphasis on innovation and engineering excellence, Aldon is a proven global source for anyone who ships or receives materials by rail. While Aldon is primarily known for its railcar wheel chocks and derails, its car stops and warning signs and holders are also industry mainstays. In 1955, Aldon introduced a cast steel chock with unique, replaceable spurs (or teeth). These spurs are the key to superior holding power. (what is a chock?)

Under wheel pressure, the spur bites into the hard, smooth surface of the rail to keep the chock from sliding. Eventually, however, like the blade of a knife, the spur edge will become dull from use.

A dull spur can’t bite into the rail to keep the chock from sliding. You can keep the sure grip of an Aldon chock by turning the spur to three new sharp edges and then replacing the spurs at minimal cost instead of buying a new wheel chock.

Chock spurs have four edges. When the first edge becomes dulled from use, you can tap the spur out of its slot and re-insert it with a fresh edge exposed. By turning the spurs at intervals, you extend the chock’s service life and effectiveness.

Aldon offers both flush and exposed rail chocks. The exposed rail is open to the ties, while the flush rail is encased in pavement with only a flangeway left open on the inside of both rails for wheels to pass through.
View products 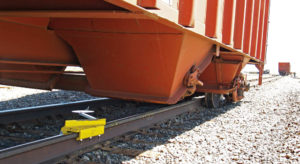 OSHA, FRA, and DOT regulations require to derail protection for all active rail sidings. The derail lifts the flange of the wheel and drops it clear of the rail. At the same time, the wheel on the other rail falls down between the rails. The derailed wheels bite into the soft surface of ties and ballast and slide to a stop.

In 2010, Aldon patented its lightweight Sabertooth® portable derail, which features tool-free installation and a safety hook that bites into the tie to keep the derail in place. Aldon offers an enormous selection of warning signs, including standard blue flags, crossing flags, clearance signs, enhanced blue flags, magnetic signs, and its oversized MoonSign, which features retro-reflective facing and oversized lettering on both sides, which allows it to be seen at a greater distance than the standard small blue derail sign.

The History of Aldon Company, Inc

The Aldon Company, Inc. was founded in 1904 by Emil W.K. Roe, a railroad supply salesman who decided to quit his job and start his own business in a one-man office in Chicago, the nation’s rail hub. The name “Aldon” was born when a friend of Roe’s asked him if a new product was ready for launch. “It’s all done,” Roe replied. The name stuck and is now a registered trademark of the company.

The first products Aldon produced were cast-iron rerailers, which they painted black and delivered to local railroad yards via horse-drawn wagon.

During its first three decades, the company was awarded five patents for its railroad track repair products. (It has received 12 more patents since then.) In 1955, Aldon launched a cast-steel wheel chock with replaceable rail-biting spurs. It also opened a new market with the industrial firms served by the railroads.

In 1971, the launch of OSHA and its accompanying rail safety regulations drove significant growth for Aldon. By 1976, business had grown so much that the company built a 16,000-square-foot factory and office in Waukegan, IL.