Often mounted in a ground-level tank system, this valve is a safety device to prevent accidental fluid leakage. An anti-siphon valve is usually required where the tank’s liquid level is higher than the dispenser’s height or any of the product piping. 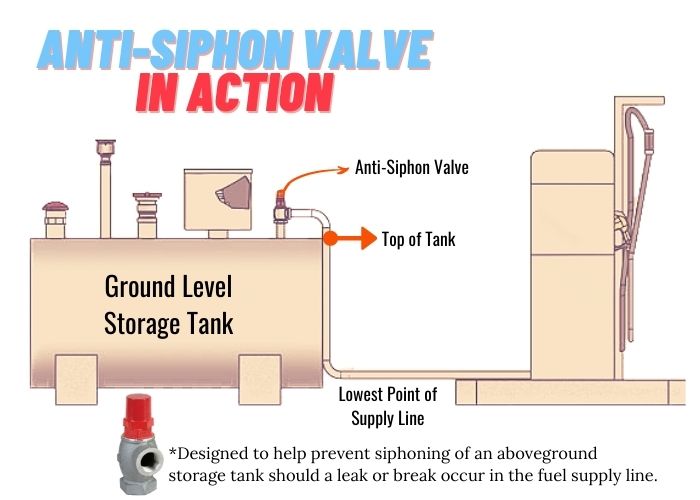 To understand how a fuel valve operates, consider the case of a fuel tank placed above a fueling station.

Gravity continuously attempts to spill fuel down the pipe connecting the gasoline tank to the dispensing pump. Counteracting the force of gravity, gasoline siphoned into the pipes should maintain a positive shut-off system unless the operator expressly instructs that the product flows into the tube.

These valves are alternately called “anti-siphon valves” or “shutoff valves.” They either allow or forbid fluid to flow.

When it comes to regulating these systems, the system is regulated electromagnetically, and a solenoid valve usually does the trick. Such a valve is situated downstream of the block valve located just outside of the tank shell’s discharge tank tube.

An anti-siphon valve is built to stay closed, thereby preventing liquid flow until any constructive action, such as turning on the pump, is taken. On the solenoid principle, an anti-siphon valve can work. Others are control valves loaded by spring. Both can be opened only if the pump works.

Offshore oil rigs have underwater valves for controlling the flow of gasoline. Both are electronic and compliant with a manual override if the shutoff valve needs to be opened or closed, so someone must submerge or in the water to open or close the valves.