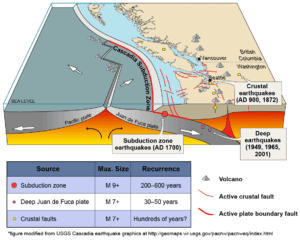 According to Definitions Active and Inactive faults are defined as:

Active fault – An active fault is a fault that is likely to have another earthquake sometime in the future. Faults are commonly considered to be active if there has been movement observed or evidence of seismic activity during the last 10,000 years. Active faulting is considered to be a geologic hazard and related to earthquakes as a cause. Effects of movement on an active fault include strong ground motion, surface faulting, tectonic deformation, landslides and rockfalls, liquefaction, tsunamis, and seiches. Quaternary faults are those active faults that have been recognized at the surface and which have evidence of movement in the past 1.6 million years. That is the duration of the Quaternary Period. Related geological disciplines for active fault studies are geomorphology, seismology, reflection seismology, plate tectonics, geodetics and remote sensing, risk analysis, as well as other disciplines.

In relation to fracking, there are theories that the fracking process in the crude oil industry can disrupt an active fault or possibly activate an inactive or dormant fault.   Seismologists all over the world are actively studying areas in the world where fracking takes place to either validate or dispute these theories.