Since the first railroads were built almost 200 years ago, locomotive/train design and technology has advanced significantly, from steam-powered engines to super-fast maglev trains. Often overlooked, however, is the technology behind the thing that keeps these trains moving in the right direction: the tracks. Railroad track construction has undergone plenty of reform since the 19th Century, and this article summarizes how railroads are constructed. Before discussing construction, here are some commonly asked questions:

How wide are railroad tracks?

The US standard railroad gauge is 4 feet, 8.5 inches  (Gauge means width between the two rails). The U.S. federal safety standards allow the standard gauge to vary from 4 ft 8 in (1,420 mm) to 4 ft 9 1⁄2 in (1,460 mm) for operation up to 60 mph (97 km/h). It’s commonly believed and was even written about in Popular Mechanics, that the gauge or width between tracks descended from Imperial Roman war chariots. This is false and more information can be found on Snopes.

Why do buses stop at railroad tracks?

This is required by law in the US. But only for school buses, not regular commuter buses. The law goes back to a 1938 fatal accident in Utah where the driver stopped at the railroad but did not visually confirm if a train was coming due to blizzard conditions. The fatalities from the accident tragically included the driver and 25 children. 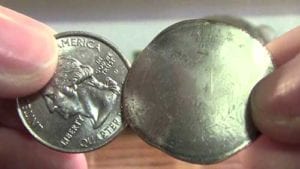 Can a coin derail a train?

We added this one for fun and of course, a coin can’t derail a train. A coin is not significant enough to cause a train to run off the rails and will have no effect at all. Based in mass and momentum and the principle of conservation of momentum comes into play and when two bodies with masses interact, the total momentum remains conserved.

In this case, the two bodies involved are the train and a coin. A train weighs thousands of pounds and a coin is merely a few grams. That and moving at a high velocity, while the coin is stationary, the momentum of the train is much more than the coin. The coin is too light to affect any momentum or direction changes on its own on the train.

Is putting a coin on the track’s illegal? Yes on two counts and it’s also dangerous. Often times when an object is run over by the train, the momentum and weight will launch it as a dangerous projectile.  Being on the tracks is considered trespassing and illegal and destroying a coin is illegal because it’s federal property.

The first step of laying down a railroad track is not very obvious, happening below the surface. One of the first things crews typically do is grade or install drainage systems in order to prevent the railway from waterlogging. These systems typically utilize pipes, carrier drains, and sometimes attenuation ponds, in order to ensure that proper drainage occurs, and subgrade deterioration and erosion are avoided.

The next step of this process involves laying down a layer of material for the rails to sit on in future steps. This process is called “ballasting”, and is divided into two steps: laying the bottom ballast and laying the top ballast. The bottom ballast is made up of primarily coarse sand and is spread evenly and level in order to provide a slightly malleable, but firm base for the railway crossties, also called sleepers, and the next layer.

Next, the railway sleepers are placed on top ballast, and spaced appropriately. This process can be done manually, or by the use of specialized machines, but in both cases, workers make sure that the central point of the sleepers and the rail track centerline are in alignment. Once this process is complete, railroad spikes and fasteners, also called chairs, are fixed to the sleepers of wood, or bolted down with a chairbolt.

At this point, the rail is ready to be lowered onto the sleepers and fastened to the spikes. While a relatively straightforward process, there are many things engineers and workers have to keep in mind when laying down rails. One of these factors is the correct use of rail joints when fastening multiple lengths of rail together with a fishplate.

Most modern railways utilize continuous welded rail (CWR), sometimes known as ribbon railings. Rails are welded together by using flash butt welding to make a single continuous rail which might be a few kilometers long. As there are just a few joints, this kind, of course, is quite powerful, provides a smooth ride, and requires less maintenance; trains may travel on it at greater rates and with less friction. In some cases, the cone can last for several weeks.  The very first welded trail was used in Germany in 1924. And is becoming common on primary lines as in the 1950s.

An important factor is a tension in CWR installations. Temperature can have dramatic effects on railroad tracks when the metal in the rail expands or contracts, having the potential to cause the track to buckle or separate. Because of this, knowing the Rail Neutral Temperature is essential.

After the rail has been laid, the top layer of ballast is typically applied. This layer of ballast is made of small, coarse rocks of various shapes and materials. It is important that these rocks be irregularly shaped and not uniform, as they will pile up and hold stronger. This ballast will fill in all the gaps between and underneath the sleepers and rails, providing a strong base for the track as a whole. Typically, a second layer of top ballast will be applied after some trains pass to solidify the form. 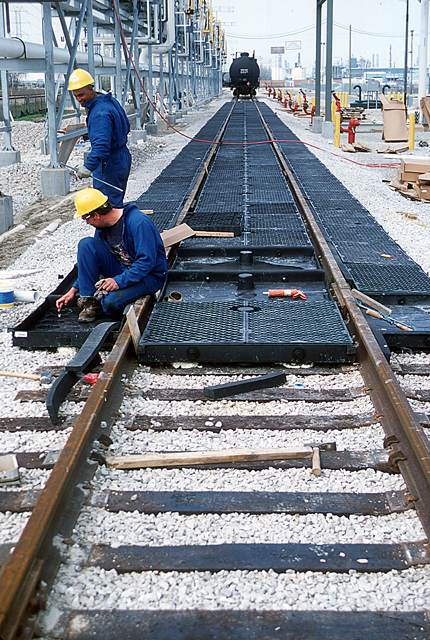 Aside from railway accidents, the next most common risk of hazardous spills comes from the loading and unloading of liquids. Facilities are required to have spill prevention measures or risk SPCC and EPA fines. The main form of spill prevention is railcar track pans and SafeRack offers a complete range of railroad track pans and spill containment systems are SPCC and EPA compliant and safely captures hazardous spills from rail cars. Our Polyethylene track pans and Metal railcar track pans are used globally to protect from accidental spills at railcar wash facilities, railroad tank car loading areas, and locomotive fueling stations.

Report an oil or chemical spill.
For emergencies and other sudden threats to public health, such as: oil and/or chemical spills, radiation emergencies, and biological discharges, call the National Response Center at 1-800-424-8802. Learn more at epa.gov