In the early years of motoring, before dedicated gasoline stations existed, motorists bought gasoline from hardware stores, general stores, pharmacies, and even blacksmiths. These businesses had pre-existing relationships with the refineries through their sale of kerosene, used for stoves and as a lighting fuel. Stored in five-gallon cans stacked curbside or in large above-ground tanks, the fuel was poured into the automobile’s gas tank using a funnel with a chamois as a filter.

Due to fire danger and a series of unfortunate mishaps, public concern and regulators forced the sale of gasoline to dedicated retail facilities outside of city centers, creating a new type of business called the filling station. Both the filling station and the gas pump would evolve into what we now know as the modern gas station.

Several locations around the United States claim to be the site of the nation’s (possibly even the world’s) first gasoline station, known to motorists at the time as filling stations. According to the 1994 book “The Gas Station in America” by John Jakle and Keith Sculle, “Where and when the first gasoline station appeared is difficult to establish since various types of ‘stations’ appeared on the American scene between 1907 and 1913.”

According to our research, a few historical firsts have been identified: 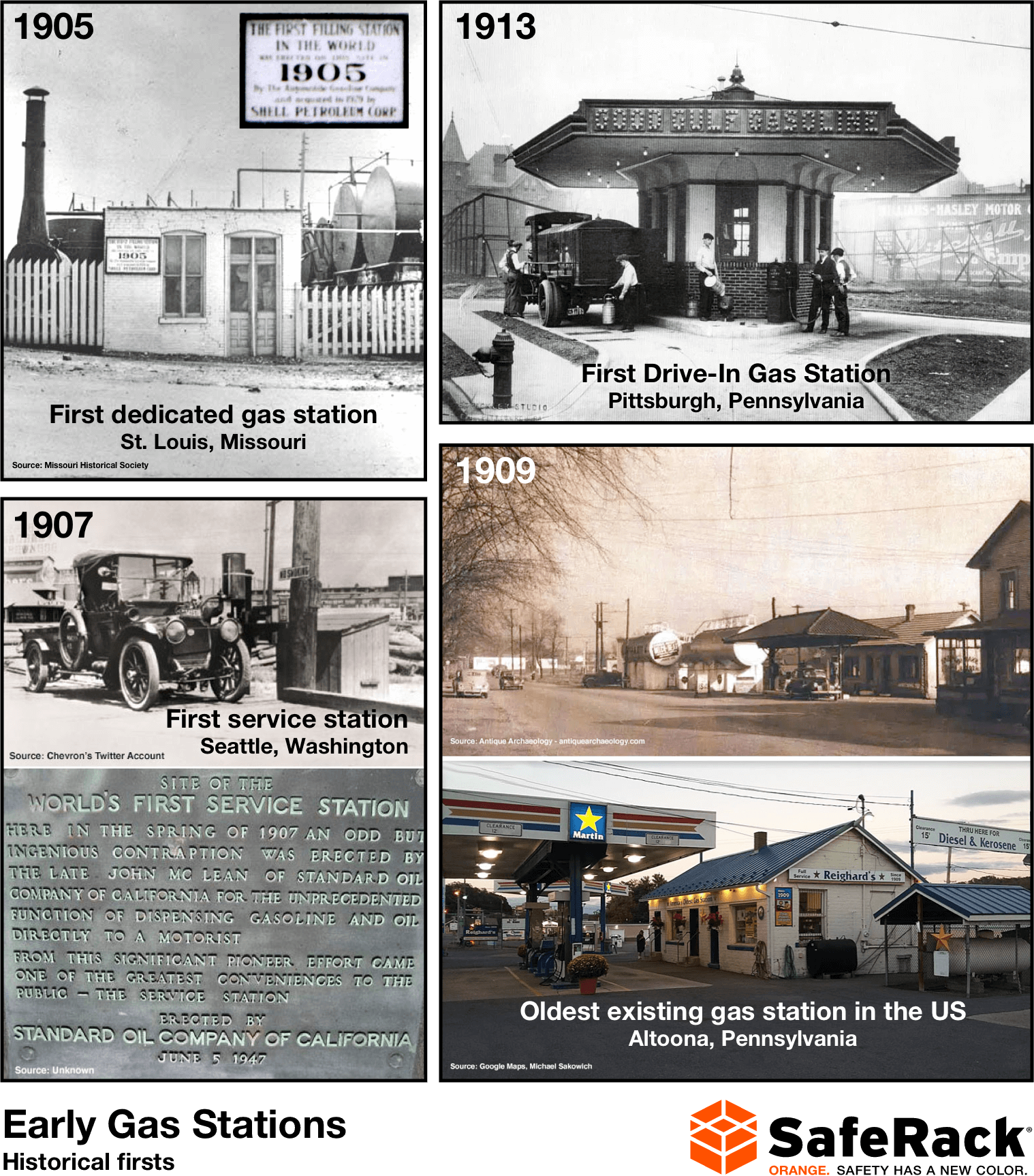 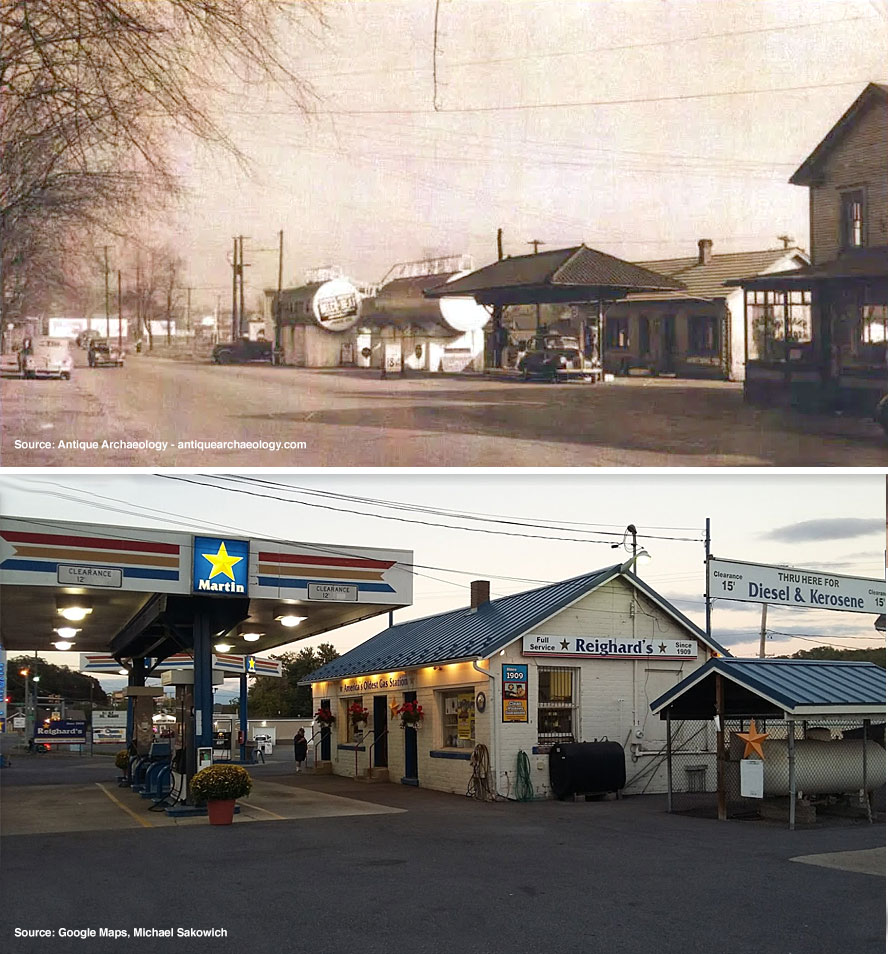 In 1913, Gulf Refining Company opened the world’s first drive-in gas station at Baum Boulevard and St Clair’s Street. In addition to selling gasoline, it offered crankcase service, tire installation, and free road maps, air, and water to motorists. This was also the first architect-designed station. On its first day, the station sold 30 gallons of gasoline at 27 cents per gallon. On its first Saturday, Gulf’s new service station pumped 350 gallons of gasoline.

History of the Gas Pump

Before the dawn of the filling station, hardware stores and general stores stored kerosene in large tanks to be ladled into customer containers. It was 1885 in Fort Wayne, Indiana where kerosene gas pump inventor, S.F. Bowser sold his newly invented kerosene pump to the owner of a grocery shop. This solved the messy problem of a storekeeper ladling flammable liquid into whatever random container the customer brought in. At that time, kerosene was used to fuel stoves and lamps. Gasoline was simply a volatile byproduct of refined kerosene. And the Evolution of the Gas Pump was officially underway. 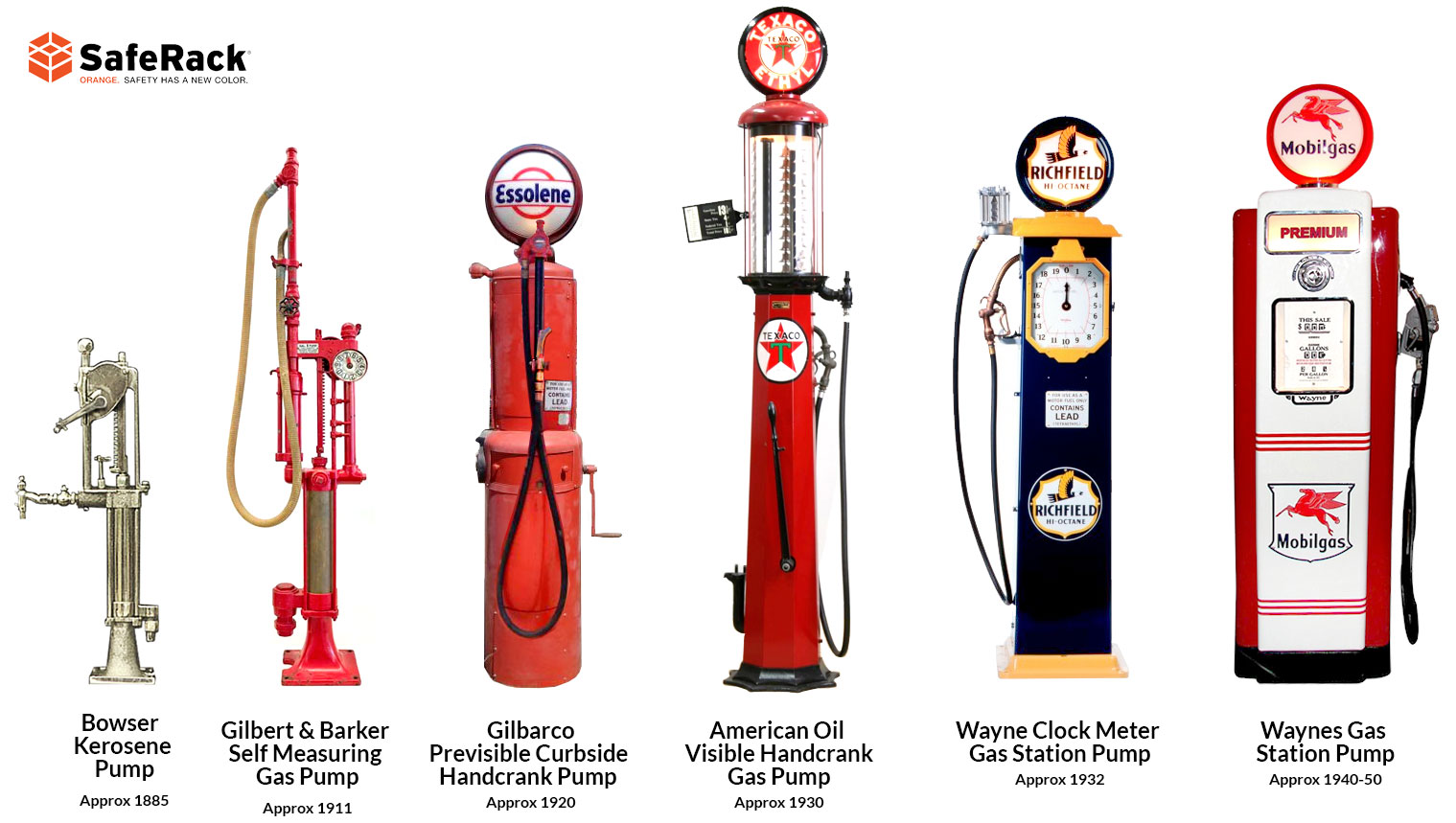 As with most things in the early days of industry, work was dangerous with fatalities and serious injuries accepted as part of the job. Getting bulk liquids from the source to the retail location required vehicle or container top loading. Regardless of treacherous weather conditions, workers climbed on top of vehicles to align the loading arm, load, and top off the tank. Not only was this dangerous, but awareness and concern for the health and environmental hazards associated with spills and fumes were still decades away.

As technology has evolved, modern-day workplaces still face elements of risk, but injuries or “recordables” are thankfully rare. SafeRack is the leading innovator in bulk transfer and fall protection equipment. With dozens of patented safety features, our equipment is the safest and most ergonomic in the industry, manufactured to increase throughput and last longer with less maintenance.