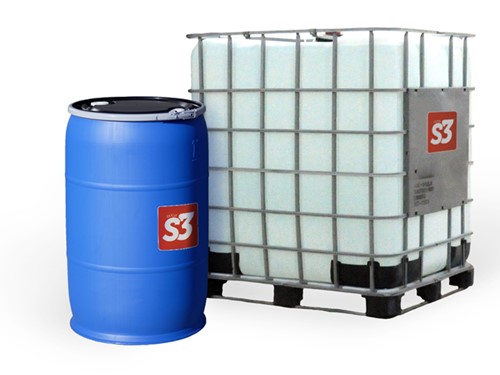 Over the past decade, Ultra-S3 has been widely used along with an oxidizer (commonly hydrogen peroxide) as a cost-effective way to eliminate the smell emitted by H2S, keep H2S at acceptable levels, and limit the costly deterioration and corrosion it causes to facility infrastructure.
Ultra-S3 is currently used around the world in facilities including landfills, wastewater treatment facilities, wastewater retention ponds, food processing plants, chemical plants, paper mills, and sewage lines.

Ultra-S3 and an oxidant, generally hydrogen peroxide (H202), are injected separately into the waste stream or over the target area containing the hydrogen sulfide gas (H2S) or other recalcitrant organic compounds.

When combined with an oxidant, Ultra-S3 produces hydroxyl radicals, which are highly efficient oxidizers that break down difficult chemical bonds and remediate organic compounds to non-detectable levels.

The benefits of using Ultra-S3

1.  Greater efficiency – Through both testing and implementation, S3 has shown to have a significant effect on both the rate and overall efficiency in the breakdown of sulfide when used alongside hydrogen peroxide, as opposed to using hydrogen peroxide by itself.
2.  Safe – Ultra-S3 and its chemical components have been classified as non-hazardous under the Toxic Substance Control Act of 1976 (TSCA). It’s also chemically engineered to target problem compounds without destroying environmentally beneficial microbes.

3.  Easy implementation – S3 treatment can be implemented within an existing sulfide-treatment infrastructure with minimal capital investment.

4.  Greater protection for facilities – S3’s efficiency in breaking down H2S in a facility helps protect its infrastructure from costly deterioration and corrosion caused by the sulfide.

5.  Also effective on other compounds –  including benzene, methyl tert-butyl ether (MTBE), toluene, trichloroethylene, and many others.

[Transcript] The dangers of hydrogen sulfide, also known as H2S are widespread and can cause many problems. Perhaps relatively minor but incredibly frustrating problem with H2S is that it stinks. That awful sulfur smell can be a big problem for municipalities and plants that are close to residences or offices. A more significant problem and the most expensive one is what hydrogen sulfide does to infrastructure. Each year H2S causes hundreds of millions of dollars of damage from corrosion and deterioration to sewage systems, treatment plants and other industrial facilities. At higher concentrations, hydrogen sulfide can cause very serious health problems and even death. It is one of the leading causes of workplace gas inhalation deaths in the United States. Ultra S3 eliminates hydrogen sulfide. It’s an effective oxidizing system that’s been used successfully in the United States and abroad for more than a decade. It’s very economical and significantly more effective than hydrogen peroxide alone. It’s been used to treat landfills, wastewater treatment facilities, wastewater retention ponds, food processing plants, chemical plants, paper mills and sewage lines. The first step in using Ultra S3 is to test the pH of the water it will be used with. For optimal results, the water must have a neutral pH of 7.2 to 8.4. In the next step, measure the concentration of H2S with the appropriate equipment. The target range is greater than 15 parts per million. Ultra S3 is available in 55-gallon drums or 275 gallon totes.

Using peristaltic metering pumps introduce the Ultra S3 and oxidant into the system. In this example we’re using hydrogen peroxide for the oxidant. Deploy the solution into the system as far upstream as possible to provide maximum treatment time.

Ultra S3 and the oxidant must thoroughly mixed by natural agitation or if necessary by mechanical means. Examining the reaction at a molecular level helps explain exactly what occurs. When combined with an oxidant, Ultra S3 produces hydroxyl radicals that are capable of treating a variety of recalcitrant organic compounds.  Hydroxyl radicals are highly efficient oxidizers that break down difficult chemical bonds, remediating organic compounds to non-detectable levels. In this case, hydrogen peroxide is the oxidant. It’s present in the water with hydrogen sulfide and S3. S3 splits one hydrogen peroxide molecule into two hydroxyl radicals which are much more effective at neutralizing H2S than hydrogen peroxide alone.